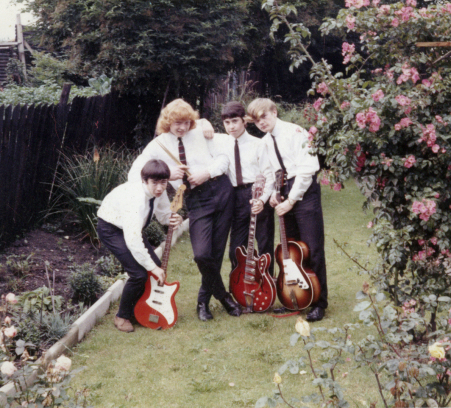 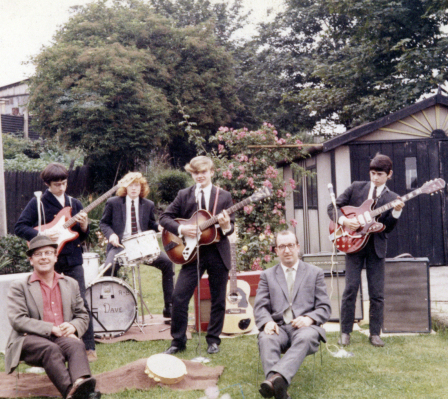 The Roadrunners pose with their manager Joe Bradley (L), and friend Ken Taylor. Norton, near Stockton 1965. My guitar is nearly as big as me! 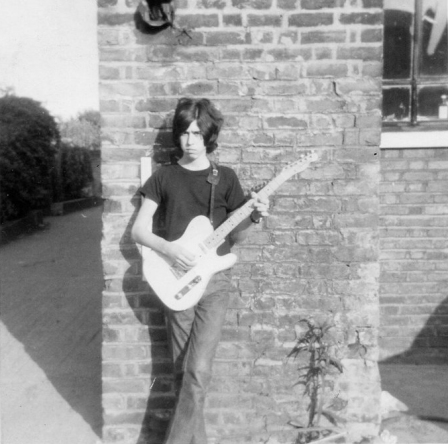 In 1967 The Roadrunners amended their lineup, changed their name to The Wildflowers and moved from Middlesbrough to London. This is me with my Fender Telecaster in Finsbury Park, resting between engagements. We rested quite a lot for about six months before calling it a day. 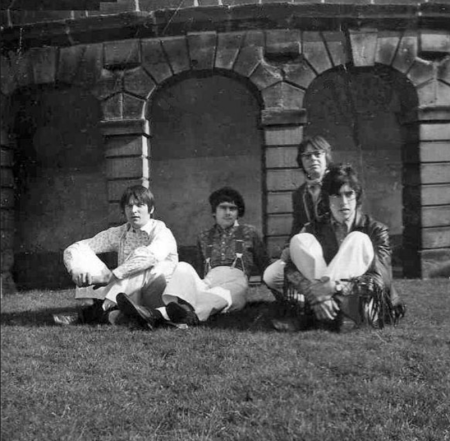 My first recording band, Tramline, 1968. From Left - Terry Sidgewick, Terry Popple, John McCoy and MM. We made two albums for Island Records. The first was Somewhere Down The Line, and the second was titled Moves Of Vegetable Centuries (!) 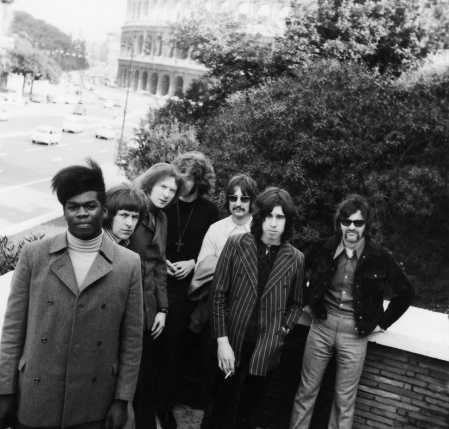 Lucas and The Mike Cotton Sound, Rome 1969. From left - Lucas, Bernie Higginson, Mike Cotton, John Beecham, Lem Lubin, MM, Nick Newall. I enjoyed playing in this band; it had a three piece brass section and we played mostly Soul music which I've always loved. Nick guested on the Maas & Moody album and his sax playing is as good as ever! 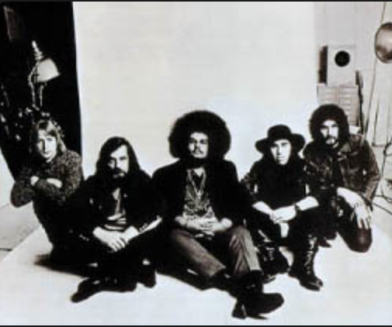 Juicy Lucy, 1972. Back cover shot for the Pieces album. From Left: Andy Pyle, Paul Williams, Jean Rousell, MM and Ron Berg.It was to be the band's third and final album 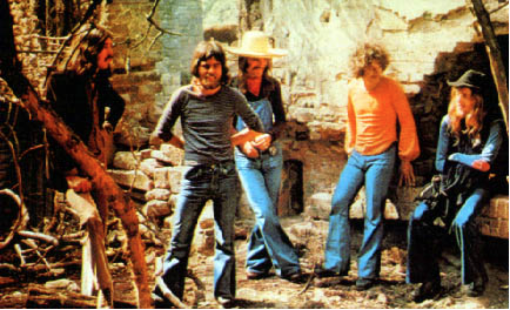 Back cover of Snafu's eponymous first album. The shot was taken in the grounds of The Manor studios, Oxfordshire, one hot summers afternoon in 1973. We were all stoned! I really enjoyed this album (I think!). From left: MM, Terry Popple, Bobby Harrison, Pete Solley and Colin Gibson. 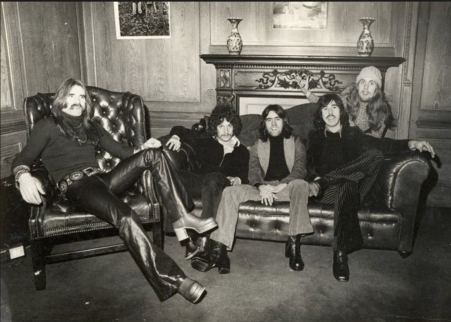 Snafu, 1974, about to sign the contract for our second album All Funked Up. From left: Bobby Harrison, Pete Solley, Terry Popple, MM and Colin Gibson. 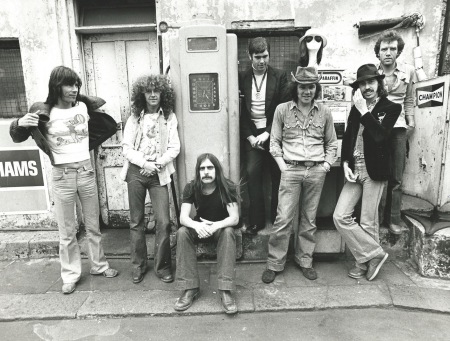 Back in 1976, Status Quo's original drummer John Coghlan put together a band as an alternative musical project to Quo. Although the objective was purely fun and good time, the musical performances were often to be commended! This is an early shot of The Diesel Band, looking like a bunch of vagabonds: the not so Magnificent Seven! From left: Andy Bown, Gordon Edwards, John Coghlan, special guest - John's occasional drum teacher Lloyd Ryan, Jackie Lynton, MM, Bob Young. 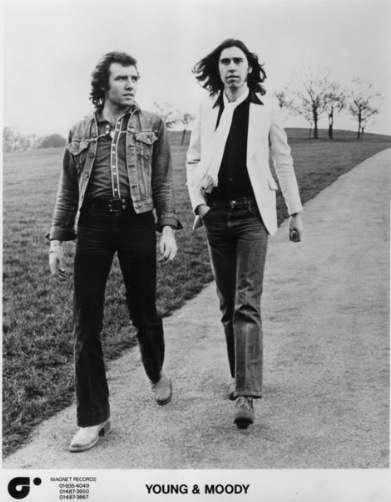 I loved recording the Young and Moody album. Produced by Roger Glover, it was so laid back it made JJ Cale sound frantic! This is a publicity shot from the album cover shoot on Parliament Hill, London in 1977. 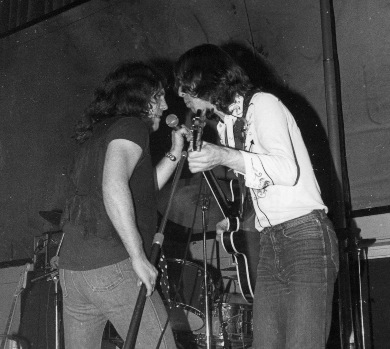 I played in Frankie Miller's band at various times in the 70's and 80's. He will always be considered one of the greatest British blues and soul singers of all time. This is a shot from a gig at Cardiff University in 1977. We are either harmonising or discussing a moot point! 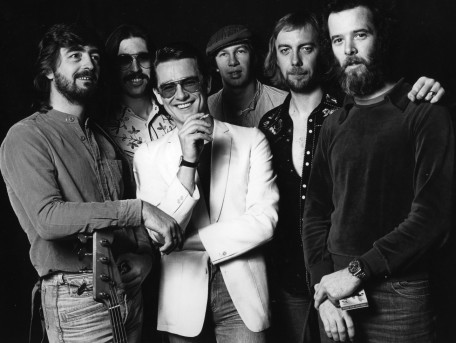 Graham Bonnet - what a voice! Before he joined Richie Blackmore's Rainbow in the early 80's, he recorded a number of solo albums. I'm pleased to say I played on a couple of them, and also his hit single ' Night Games'. As we speak, the swine still looks and sounds as good as he always did! This is a photograph from a video shoot. From left: Dave Markee, MM, Graham Bonnet, Pip Williams, Mick Underwood and Kerry Dixon 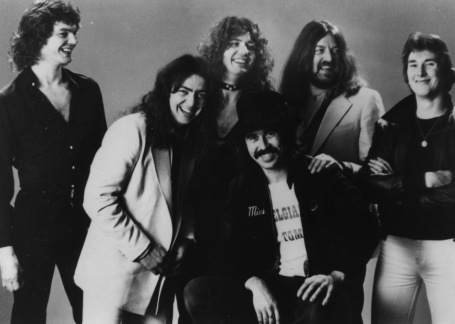 A home for my hat - a Herbert Johnson special from Saville Row. £29 at the time! This shot was taken backstage at the City Hall, Newcastle, after Whitesnake's triumphant opening show on our first major tour, 1978. 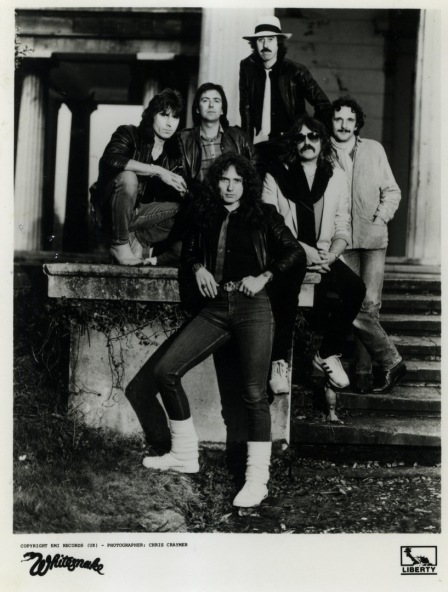 Whitesnake MK2, 1983. Although David is wearing a pair of girlie leg warmers, I can assure you we were not playing at Pineapple Dance Studio that night! Photo taken at Highgate cemetery close to Karl Marx's tomb. From left: Cozy Powell, Mel Galley, David Coverdale, MM, Jon Lord, Colin Hodgkinson. 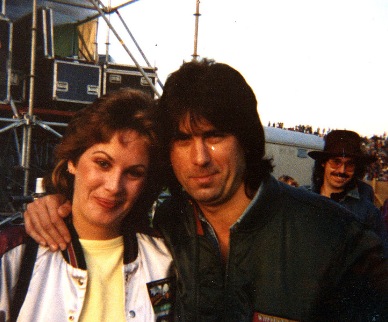 An early example of photo-bombing, courtesy of MM. Victims are Cozy Powell and friend at the Monsters Of Rock Festival, Zeppelin Tribute Ground, Nurenberg, 1983. 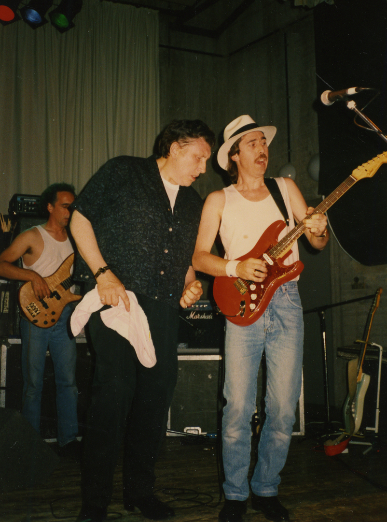 I've been lucky enough to work with some of the greatest singers in the business. Here's another one - the inimitable Chris Farlowe. Lurking in the background is bass player (and a true character) Gary Twigg. Germany, 1989. 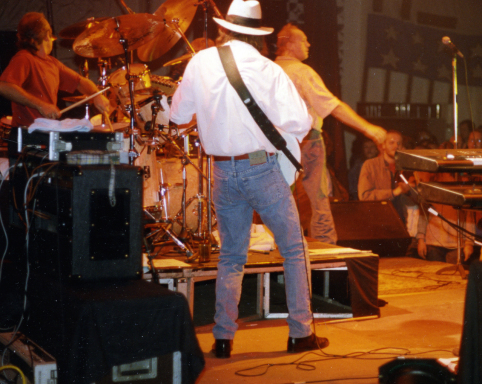 It was a great experience working with Roger Chapman and The Shortlist; always expect the unexpected! This is a shot from a German tour in 1991. From left : Henry Spinetti, MM, Chappo. 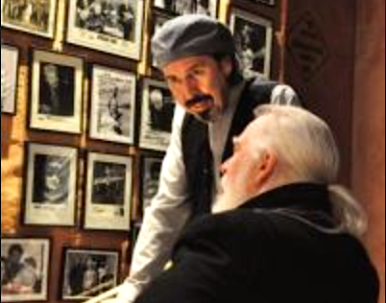 With the master...Jon Lord!! Apart from being one of the greatest musicians I have ever worked with, he was also the nicest man on earth. Circa 2011. 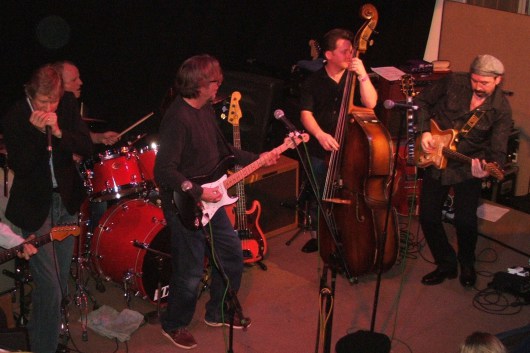 Eric Clapton was and still is a major influence on guitar players around the globe which is why it was so special for me to play alongside him. Here I am just showing him a lick or two!! 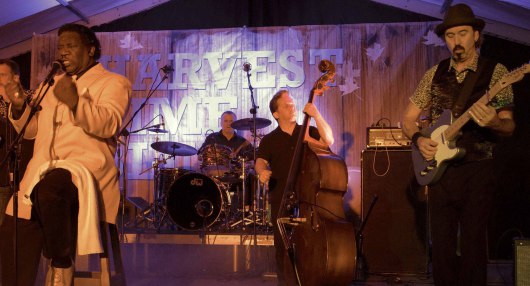 On stage with Mud Morganfield at the Harvest Festival in Northern Ireland 2014. It was great to play his Pop's songs as Muddy Waters was a great influence. Long live the Blues!! 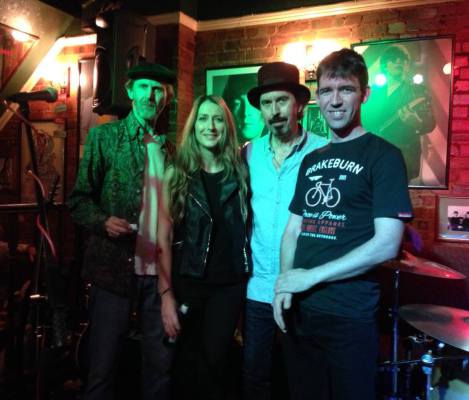 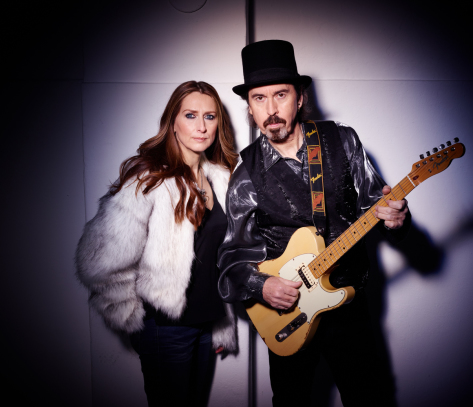 Maas & Moody. A shot of Ali and MM from the Black And Chrome album cover photo session 2016. Thanks to Alice Theobald

(hair and make up) and fashion designer Eve Tokens, we scrubbed up rather well! 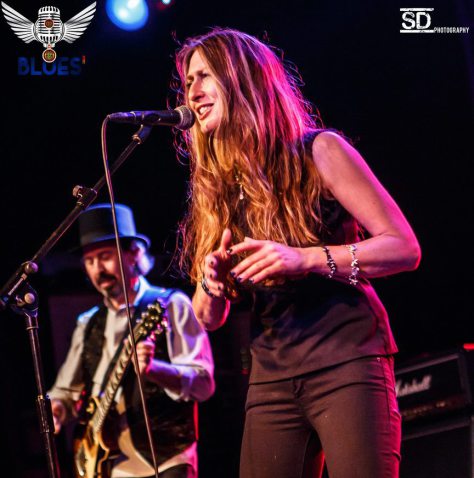 MM and Ali Maas, Sheffield O2 Academy, April 2016. This was our first major gig as Maas & Moody, and we were very well recieved by the Hellfest crowd. 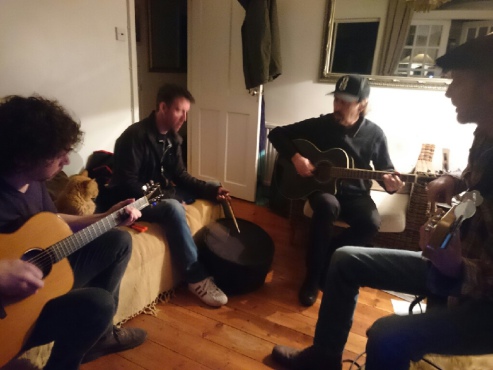 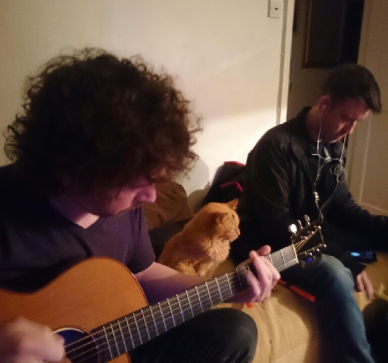 Boris insists on doing some sofa Karaoke....Stuck In The Middle With You (two).... 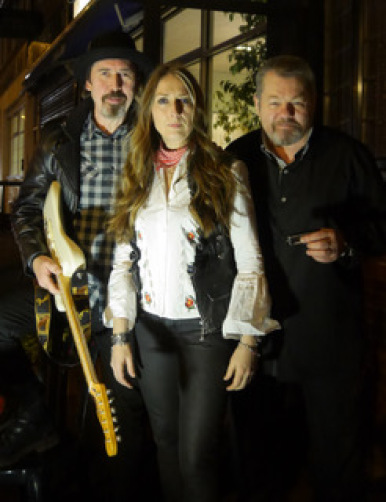 MM, Ali Maas and the great blues harp player Alan Glen getting ready to hit 'em with some down home soulful stuff as a trio! March 2017. 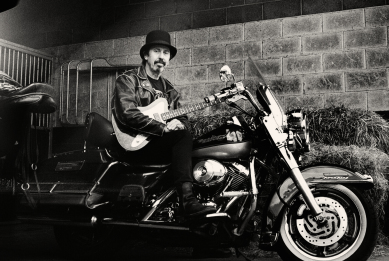 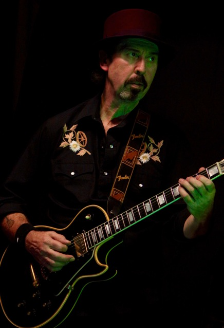